The PICO CLUB
Where To Fly

As paramotor pilots we don't normally have “official” flying sites. In fact a great many pilots (new & old) don't really know what is legal or where you "should" launch & fly to avoid complaints to CASA and subsequent investigations. There are still many PPG pilots with the belief that they can fly from any vacant piece of land around - footy fields, parks, council reserves, public beaches etc. And some pilots are not really aware of airspace requirements, or where to go to find out.

Passionate About Powered Paragliding.
WHERE TO FLY PPG

LOCAL PARKS, FOOTY FIELDS AND COUNCIL RESERVES
All of these are typically controlled by the local council.
Nearly every council in Australia operates using the law under the “Local Government Act” and this forbids operations of aircraft (including us) in any of their lands without a written permit.
Whilst permits are not impossible to obtain they can be exceedingly difficult to get.
A typical example of the local council laws governing this is shown here: TASMANIA (Hobart City Council) :
BY-LAW 5 of 2008 BY-LAW MADE UNDER SECTION 145 of the local government act 1993
AIRCRAFT: 32. A person must not land or launch an aircraft in any park, recreation ground, natural area or open space unless authorised to do so by permit or in case of emergency.
SUMMARY – YOU CANNOT LAUNCH OR FLY FROM LOCAL PARKS, FOOTY FIELDS OR COUNCIL RESERVES without prior, written authority.

All of these are typically controlled by each states body for them (eg ; In VIC it's "PARKS VICTORIA", in NSW it's "NSW Office of Environment & Heritage")
Nearly every state body in Australia operates using the law under their “National Parks Regulations” and this forbids operations of aircraft (including us) in any of their lands without a written permit.
Again whilst permits are not impossible to obtain they can be exceedingly difficult to get.
2 typical examples of national parks regulations governing this are shown here:
PARKS VICTORIA National Parks (Park) Regulations 2003 S.R. No. 74/2003 44
(2) A person must not, in a park— (a) launch or land an aircraft; or (b) deliver anything by an aircraft— unless that person does so— (c) in an area set aside by a determination of the Secretary under subregulation (1) and in accordance with that determination; or (d) under and in accordance with a permit issued by the Secretary.

NSW Office of Environment & Heritage 4. Hang-gliding and paragliding are classed as activities that involve risking a person's safety under clause 22 of the National Parks and Wildlife Regulation 2009.
An appropriate consent from the Park Authority is therefore required. 5. The NPWS may authorise a person to hang-glide and paraglide, in accordance with this policy and procedural guidelines, and where the activity is consistent with a plan of management for that park and the National Parks and Wildlife Regulation (Clause 21), within a: national park state conservation area regional park karst conservation area.
6. As hang-gliding and paragliding are contrary to the purpose and principles of these areas, they will not be permitted in: nature reserves OR Aboriginal areas.
Hang-gliding and paragliding facilities and activities will not be permitted in declared wilderness areas, as they are not consistent with the management principles for these areas.
SUMMARY – YOU CANNOT LAUNCH OR FLY FROM STATE or NATIONAL PARKS including BEACHES without prior, written authority.

FLYING SITES & INSURANCE
It is important to note that our insurance, through our HGFA membership, would only be valid provided we are flying legally. Should you be found to be using sites without permission then it is most likely that this insurance would be considered invalid and you would not be covered for any accident, injury or damage that occured. 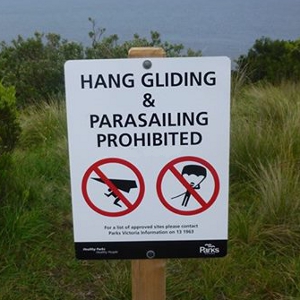 AIRSPACE - IN THE AIR

Civil Aviation Order 95.8 Instrument 2011
Under the CAO and CAR regulations we are limited to flying within Class G airspace or Class E airspace in V.M.C (VFR) conditions. You must refer to your VNC charts for airspace requirements prior to flying anywhere. You can obtain VNC Charts from www.airservicesaustralia.com

Other Flight Limitations for PPG/PHG (abbrev) from the HGFA Operations Manual 2015 :

Minimum Height : A PPG/PHG must not be flown at a height lower than 300 feet unless the land is owned by, or under the control of, the pilot, or the owner of the land (including the Crown/parks/beaches) has given permission for the flights to take place.
Maximum Height : A PPG/PHG must not be flown at a height in excess of 10,000 feet above mean sea level unless each person in the aircraft is supplied with oxygen from a supply system approved by CASA or the HGFA; and has an oxygen license endorsement.
Minimum Height (towns/houses) : A PPG/PHG must not be flown at a height over any closely-settled area below 1,000 feet above terrain, or the lowest height from which the glider could land outside the closely-settled area, whichever is the higher.
Aerobatics : Except with the written permission of CASA, a person must not carry out acrobatic flight in an aircraft to which this Order applies over a closely-settled area.
Negligent Operation : PPG/PHG shall not be operated: (a) in a reckless or negligent manner so as to endanger the life or property of others; (b) in such a manner, or in such circumstances as is or likely to cause avoidable danger to any person or property (including animals) on land or water or in the air. (c) in such a manner so as to cause public annoyance and complaint regarding noise. Pilots must respect the public right to peace and quiet.

Many of our club members have been flying since the conception of the sport so there is no shortage of experience for new pilots to draw upon. Our club safety officers and club mentors are always willing to help with advice. For the list of these pilots please click here >>